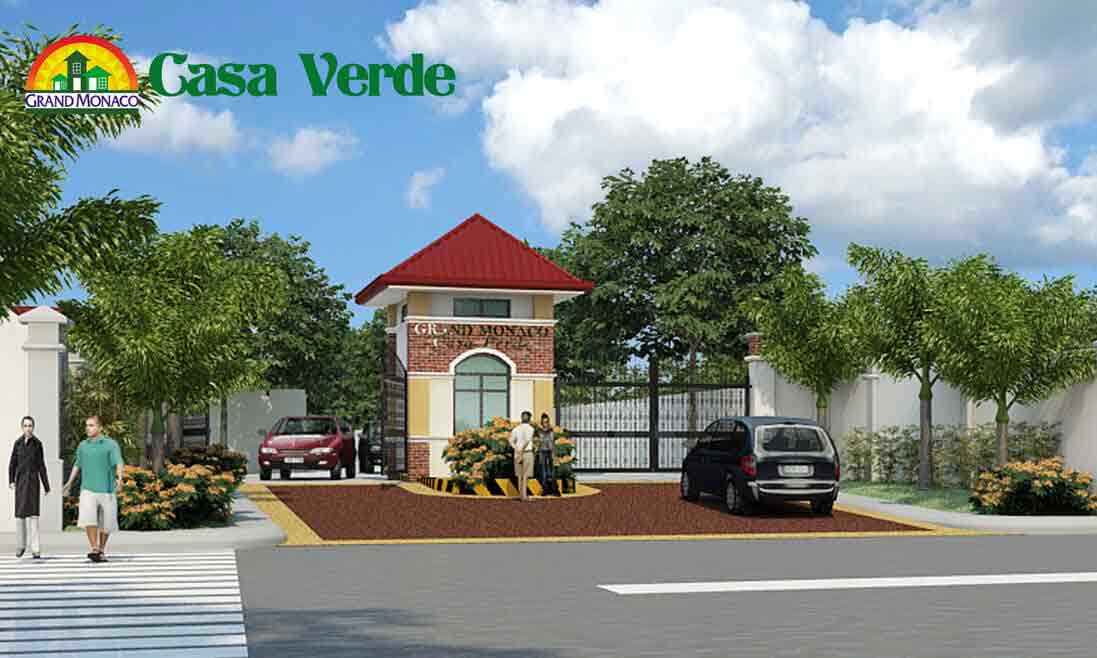 Relish the beauty of Bulacan, and succumb to the natural environment of the countryside offered by the Casa Verde Calumpit, your verdant home away from the concrete jungle of the metropolis.

This residential development, a product of Grand Monaco Estate Developers, Inc.’s (GMEDI) green community, is near the Calumpit- Malolos boundary along MacArthur Highway in the south and bounded by Apalit, Pampanga to the north and lies near the Bulacan State University and the Centro Escolar University- Malolos Campus. Surrounded mainly by the Angat River, one of the largest rivers in Bulacan province that runs from the Sierra Madre mountain range to Manila Bay with a catchment basin area of more than 1,000 square kilometer making the area flood-free. Casa Verde is truly natural, add to its man-made marvels of garden and landscaped parks, that make the site more lovely and scenic. What else does this enchanting paradise offers? The site is less than an hour drive from the Central Business District of Quezon City and a mere 20-minute journey from the Philippine Arena (the largest indoor arena in the world) and the Philippine Sports Stadium, both in Bocaue and part of Sta. Maria in Bulacan.

Casa Verde is specifically situated along MacArthur Highway, Brgy. Pio Cruzcosa, Calumpit, Bulacan, an address where, aside from great universities on its immediate vicinity, other schools like Calumpang Elementary School, Frances High School, Darwin International School, St. Anthony Academy, Bulacan Polytechnic College Malolos, Colegio de Calumpit, and other establishments and institutions like St. John the Baptist Church, Jec’s Island Resort, NSO Office, SSS Malolos, South Supermarket, Robinsons Mall, Bulacan Medical Center, Calumpit District Hospital, United Pulp and Paper Company, and other establishments are located near the Casa. The site is just a 10-minute drive from the Tabang Exit of NLEX which brings it closer to any destination from north to south and from east to west.

Casa Verde is vibrant, aside from being verdant, and dynamic despite being laid-back on its surroundings and with truly amazing scenery. The project offers typically Single Attached Bungalows (SAB) with common community features that make living more enjoyable, which include grand entrance gate with guardhouse and 24/7 security, higher elevation of site compared to street level, efficient drainage and electrical systems, wide concrete roads, efficient and centralized water distribution system. Lot areas of houses are typically larger than most of other residential developments in the region which make room for other improvements and modifications in the near future especially for those growing families.

Live chat operators for your websites provided by Help Desk 24/7.

Grand Monaco Casa Verde in Bulacan, Philippines is a premier House & Lot project available for sale. If you're looking to rent or purchase Casa Verde, then check here first. We have full details of Casa Verde updated regularly as well as everything you need to know about the availing and booking process, broken down into stages that includes selecting a unit, choosing a payment plan and buying your dream home at the right price. For price list, free site tripping or showroom visit, personalized service, model house, unit plans, floor plans, payment terms, CHAT LIVE with an agent 24x7. Always only buy from PRC licensed Real Estate Brokers and Agents.

Why Invest In  Casa Verde

All house units come with immense living, dining and kitchen areas; with service and laundry areas, small lawn or front yard. Frontage length is usually 3 meters and 9 meters wide with side clearance of almost 2 meters from neighbor’s firewall to access service area from the front yard.

Options for turn over unit finishings

There are 2 options to choose from during turn over of unit at the Casa Verde. Option 1 is Standard Finish, which includes plain paint finish on exterior and interior walls, decorated and finished ceiling and tiled floor on all house parts, kitchen in granite counter top with stainless steel sink, partitions on bedrooms, over the counter kitchen cabinets and free cabinet in every bedroom. Option 2 is Bare Finish, which includes exterior wall is painted finish (interior wall is not painted though plain cement finished), cement flooring without tiles, no partitions, no over the counter cabinet and no ceiling. These options will make you decide the best house finish you prefer to give you more freedom on customizing your own house.

Calumpit is mainly an agricultural economy

According to an LGU report, the town of Calumpit is consists mainly of highly skilled and educated workforce (66% of population of 108, 000 people ages 20 to 59). The town has one of the highest literacy rates among municipalities in the country with 98%. The town has a training center, like the national TESDA system, which had been in existence before this agency even existed. Called the Bulacan Manpower and Livelihood Training Center (BMLTC) based at the center of the town, it serves as the training ground for both highly skilled and unskilled workforce.

The town’s major livelihood, aside from the presence of an industrial estate, includes paper manufacturing, pottery, ceramics, garments, flowers and ornamental plants, food processing, gifts and housewares, decors, and other handicrafts and religious articles. Living at the Casa Verde will give you vast opportunity to engage in this business where you will not have difficulty finding the right persons to do the job that may result to additional income on your part.